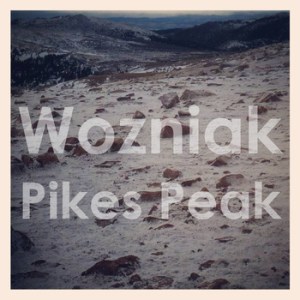 From the very first note in the opening track of Wozniak’s new EP,  Pikes Peak, I knew that i was in for something great!
I’d heard murmurings around the internet, especially up on the Twittersphere, about this band but could never find any music, just constant chatter about a proper Shoegazing band playing Shoegaze the way its meant to be played! Having been around for the end of the first wave of Shoegaze in the late 80’s where Cocteau Twins, For Against and Jesus And Mary Chain were a constant on my turntable, to the early 90’s assault on my cranium by Loop, My Bloody Valentine, Lush, Ride etc etc, I can safely say that from the very first listen to ‘Pikes Peak’ I got uber excited about how good it really is. It sucks you in and caresses your ear drums in preparation for the sonic blast that’s to come.

‘El Maresme’, the lead track from the EP, is sheer musical brilliance! Coming in at 6 minutes 59 Seconds this track swoops and soars like an eagle. Layers of lush guitars explode into the atmosphere sitting atop a steady bass and drum pattern that somehow seems to keep the whole show fixed fast to the earth. Add a dreamy vocal into the mix and we’re instantly transported to a different world. A world where sonic layering is king! This is Shoegazing at its very best!

The EP Powers along and stuffs its second track ‘Paper Hat’ in our faces! It has that ‘Slowdive’ feel to it but with a driving pulse that’s straight out of the ‘MBV’ mould. It’s a brilliant Instrumental track and it’s another treat for fans like me. A reminder of how it should be done!

Track 3 is immense! – ‘Kreuzberg’ has instrumental ‘Loop’ all over it and after listening to it on the headphones, I’m reminded of ‘Loop’s’ epic album ‘A Guilded Eternity’ and again I have to wonder what music ‘Wozniak’ were listening to during the writing and recording stages of the EP? I’m taken aback at how good Wozniak really are! ‘Kreuzberg’ ends with a magical piano line to settle your nerves and prepare you for the next aural onslaught. And it comes in the form of ‘Columbo’s Car’, a monster of a track that picks you up and throws you against the wall in a good way! Its a sonic onslaught, a bloody great track and probably my second favourite track after ‘El Maresme’. It too remind’s me of another great band, a band who I’m a big fan of called ‘Ghost Box Orchestra’ and especially their 2013 LP ‘Vanished’.

Track 5, and the final track on the EP, has ‘My Bloody Valentine’ connotations all the way through it. ‘Gesamtkunstwerk’ is a blissful track. Looping and arcing all over your ear drums. And although I hate to use him as an example, It’s as though Kevin Shields himself had stuck his fingers in it and crafted the layers of sound that streak through the track!
It’s a triumph, a really great track and a fitting end to the EP. My recommendation is that you should listen to it with headphones on, sitting in a darkened room, for the total ‘Wozniak’ experience! It’s Just brilliantly crafted ShoeGaze in its purist form! 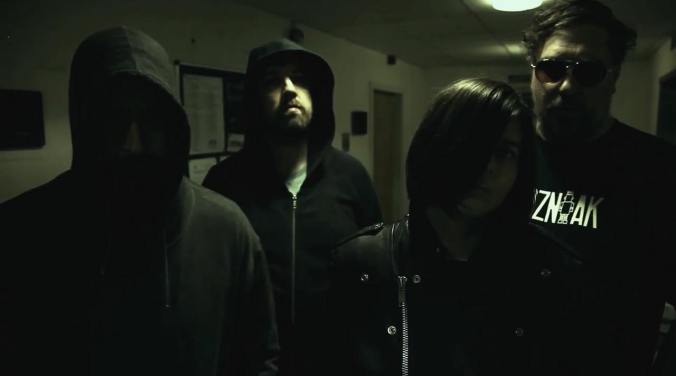 Hailing from Edinburg, in Scotland, Wozniak are a breath of fresh air to this listener! They are a four piece band, formed 2012 and are in their own words, ‘working hard to cause terminal tinnitus through the medium of epic, effects laden guitars, bamboozling bass and pounding drums’ which is by no means easy in this modern day, washed down, re- hashed trite that they call the Shoegazing scene! This is old school Shoegaze! I’m Hearing Loop, Lush, MBV, Ride, Chapter-house, Slowdive and The Telescopes! All bands that that got me excited about music in the 80’s/90’s and indeed bands that I started playing on ‘The Quiet Room’ for Radio Aktiv, in the early months of the show! It’s not that often that a band really grab me and shake out memories of early 90’s Gaze but Wozniak have done just that. Im Impressed at their level of understanding, either by a fluke of nature or purposely composed, of early sounding Shoegaze and I can honestly say that this EP is a must have in any music collection. And I’ll stand over that statement

Wozniak’s Pikes Peak EP is out June 9th on Morningside Young Team Records and you can pre order the EP or download the lead single ‘El Maresme’ from the bands bandcamp page here: www.wozniak.bandcamp.com