In the first ever interview on THE PRIMAL MUSIC BLOG, Danish gazers  – Spökraket, who have just released their latest immense collection of tracks to the general public entitled ‘In A Witch Forest‘, answered our laid back questioning with some rather interesting results! Spökraket are a neo-psychedelic band from Århus, Denmark formed in 2010. Their aim is to explore, experiment, jam, change and grow, both in their combined studio and practice room Cable Hell & on stage where the goal is to give a unique experience in the moment. ‘In A Witch Forest’, their latest opus, is a truly wonderful album. So much so, that we reckon that it’ll be in our top 10 albums of 2015 come years end. The Primal Music Blog caught up with the band & grilled them on their musical adventures thus far – 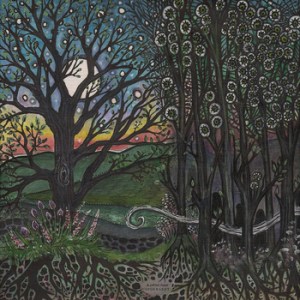 Spökraket – In A Witch Forest

1) WHO ARE YOU? TELL US ABOUT THE FORMATION OF THE BAND & IT’S HISTORY?

Our history is rather complicated despite the relatively short history of the band. We started out in 2010 when our former bass player Hans Christian and Jonathan met on the web and agreed to form a band. Soon after Bjørn and our former drummer Michael joined and we started recording improvisations with various singers. When we thought we’d settled for the right one he left one week before our first gig in April 2011 because his tinnitus issues didn’t agree with playing in a loud psychedelic band so Jonathan had to take over the vocals, wrote an extra song in a rush, rewrite other things, rehearsed so much his throat hurt and he had to use MDMA and Japanese mint tea in order to able to even speak normally. Despite all that the gig went fine. We bought a four track tape recorder and recorded our first album quickly. Looking back the album was a fucking mess but had it’s charm. Soon after Michael moved back to Odense and joined our friends from The Road To Suicide and we couldn’t deal with having a drummer living so far away which Michael understood. He travelled to gigs while we were looking for another drummer. At the time our ever returning part time member Thomas played drums occasionally while recording and guitar for gigs. Sinas was an old jam mate of Jonathan and they bumped into each other at a demonstration and he joined.

Around this time we got joined by Freja (synths, vocals) and Kasper (in NarcoSatanicos now) and started recording. Freja left after a short while but has played with us sometimes since then, she sings on two songs on the new album and contributed a bit to “Darling Adharma“. By the end of the recording of “Darling Adharma“, Solveig joined on vocals and live guitar, played some gigs with us but left in mid-2013. In 2013 we released a split 12″ with The Road To Suicide and the double album “Darling Adharma” on cassette, download and CD-R. In the Autumn Hans Christian quit. We were fed up with the ever changing line up and decided to focus on recording for as long as it took and to not get any new core members before the record was finished, though we had valuable contributions from Thomas and Freja on the new album. None of them have the time to rehearse or record two times a week though so we started looking for other members and Tobias and Jacob have agreed to join us for gigs with the option that they might become full-time members if everything works out well and it most definitely has so far. I think we got the strongest version of Spökraket ever as we got serious focus while still having lots of fun. We’ve finally found a proper balance between utter mess and discipline.

2) WHO ARE YOUR BIGGEST INFLUENCES?

My Bloody Valentine, Spacemen 3 and various spin-offs, Happy Mondays, Mazzy Star, Tinariwen, The Velvet Underground, The Electronic Hole, The Orient Express, The United States of America, White Noise, Cocteau Twins, Snöleoparden, Jesus and Mary Chain, loads of 60′s and 70′s classic pop and rock music like Simon & Garfunkel, Stones, Beatles, Creedence and such, Erkin Koray, Johnny Cash, Lee Hazlewood, Selda Bagcan, BJM, Goat, Funkadelic, Can, Neu!, Faust, Tangerine Dream, Slowdive, Primal Scream, Snöleoparden, NarcoSatanicos, Morgan Square and many others.
Guitarwise our biggest influences might be Phil Pearlman of The Electronic Hole and Relatively Clean Rivers and Jonas Stampe of Snöleoparden and Mekka for their ability to create folky, Middle Eastern inspired sounds with a very raw, improvisational and primal sound to it. Kevin Shields for the amazing sonic texture and for completely redefining the guitar, Keith Richards for his hard working mentality and rhytmical drive and anyone who ever played guitar in Velvet Underground for proving that soul, drive and personality is way more important to guitar playing than technical wank. Peter Kember and Jason Pierce of Spacemen 3 for their minimalism.
Production wise Roy Hallee, Phil Ramone, Kevin Shields, Jimmy Miller, George Martin, Delia Derbyshire and Lee Hazlewood are our heroes. Looking at those names we realise that the music world is way too male dominated, it’s a huge problem that needs to be adressed.

Psychedelic, powerful, layered, eclectic, moody, often quite improvised although more so in the past.

4) WHAT INSPIRED YOU TO START MAKING MUSIC?

Jonathan: As a kid I had a huge fascination for The Beatles, Johnny Cash and Simon & Garfunkel, my dad was a hi-fi freak and my mom is a decent guitar player. So I started reading rock magazines, books about The Beatles and even a whole rock encyclopaedia. I knew that I wanted to make music although it was only much later I started getting serious about it and it took me even longer to find the right group of people to work with.

5) WHAT ARE SOME OF YOUR FAVOURITE BANDS & ALBUMS?

Jonathan: I Think I’ve listed a few bands in that torrent of name dropping earlier in the interview, haha. My all time favourite album is “Loveless” by My Bloody Valentine as it was truly groundbreaking in every way and has amazing songs. “The Velvet Underground & Nico” and the only album released by The Orient Express definitely in my top ten as well.

6) MUSICALLY, WHAT ARE YOUR PLANS OVER THE NEXT YEAR?

We’re gonna play as many gigs as we possibly can; small and medium sized venues in Denmark this spring, small hippie festivals this summer and then hopefully some trips to Germany and Sweden before too long. The Swedes have a more humanistic approach to foreigners than the racist shit mentality that have become mainstream in Denmark. And they know how to pronounce our bandname which is kindda rare elsewhere.

Jonathan: I do some production work and engineering which I love almost as much as playing so when we don’t have gigs I’ll mess with that. We’re soon getting nice mixing desk for our studio, can’t wait. Gonna finish a record with Hunger on that one and do the majority of the Morgan Square album on it as well. With music I’m a true workaholic – With other aspects of life I’m a lazy bum. Spökraket will probably do occasional recording, but it’ll take at least a year before we’re hiding in the studio again! We need a bit of sunshine!

We’d like to give big, big thanks to Spökraket for giving their time to answer our questions! You can find out more about the band by perusing their social media pages below & their latest release “In A Witch Forest” is now available to download from their Bandcamp page with options for vinyl copies due in May or June 2015. We reviewed it for this blog after it’s release & you can check out what we thought of it HERE.