UNDER THE SPOTLIGHT | Rev Rev Rev 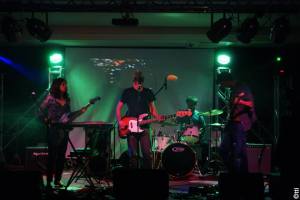 Hailing from Modena, Italy, Rev Rev Rev’s sound is influenced by first-wave shoegaze, as well as psychedelic rock, re-metabolizing these elements into a loud, woozy, fuzz-driven context. Their live sets comprise kaleidoscopic video projections waving with music, and the use of self-constructed stomp boxes, producing weird sounds.
The band formed in the summer of 2011, the release of their debut EP, ‘Hypnagogic Visions’ the following year quickly catching the attention of independent webzines and radio stations across Italy; Silent Siren has been included in the shoegaze compilation “Nothing much to lose”, featuring, among others, tracks from Panophonic, Panda Riot, Asàlto al Parque Zoologico, Shi Shi.
Their first LP (self-titled), featuring a psychedelic artwork by Brock Lefferts, has been released in October 2013 and has got lots of positive feedback from press and webzines. Songs from the LP are in rotation on many independent radios. “Rev Rev Rev” were also Number 3 on the 2013 Shoegazer Alive Top 10, were included in the ShoegazeMania Top Ten and in several other 2013 charts. Since the Summer of 2014 their debut album has been distributed in Japanese record stores.

A digital single has been released in October 2014 on WinWin Records, a new label founded by One Little Indian Records members (iTunes link: http://smarturl.it/Rev-Rev-Rev-iTunes). Side A – “Catching A Buzz” has been featured on Steve Lamacq’s show on BBC 6 Radio and its video has been in première on Clash Music Magazine. 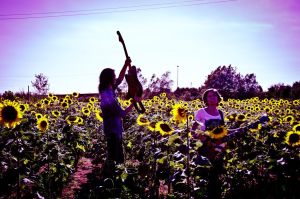 Their latest inclusion in the massive 30 band, worldwide shoegaze compilation comprised by Ear To Ear Records & Gerpfast Kolektif Records entitled: Revolution – The Shoegaze Revival shouldn’t come as a surprise! This band are one of the forerunners of this latest rebirth in the shoegazing genre!  Their impressive sound & explosive live shows have seen them grow in strength as they move forward in this modern musical landscape. We caught up with the band and grilled them with some intrusive questioning!  Big thanks to Rev Rev Rev for taking part & answering the questions for us.

Who are you? Tell us about your band and how you originally came together.

We’re from Modena, Italy (the town you may have heard of in relation to Ferrari, Lambrusco red wine and balsamic vinegar). We (Sebastian and Laura) are a couple and we’ve been in the band since the beginning in 2011, while Greta (drums) and Andrea (bass) joined us more recently, after some line-up changes.

Who are your biggest influences?

My Bloody Valentine, The Jesus and Mary Chain, Spacemen 3, The Velvet Underground, Loop, Dinosaur Jr., and The Pixies.

Describe your sound?
Our sound is kind of first-wave shoegaze, with a touch of psychedelic rock and noise. The output is loud, woozy, fuzz-driven.

What inspired you to start making music?
Listening to the music we like. Bands like, say, Sonic Youth, or MBV themselves, made us understand that there is no limit, nor is there technical concern about the sounds you can make with your instruments. The only North Star is the feelings and states of mind you would like to get.

What do you love about shoegaze?
It’s hypnotic, still loud tones, and being melodic and experimental as well.

Can you tell us about your involvement in the Revolution shoegaze compilation?
We’re really proud to be part of this project; Ear to Ear Records (UK), Gerpfast Kolektif (Indonesia) and Shameless Promotion PR have managed to put together such geographically distant bands, concurring to paint a picture with so many shades of shoegaze…

Musically, what are your bands plans over the next year?
We’re working on new stuff and should be able to release an LP in some months. The new tunes are more in the vein of experimentation, still keeping the shoegaze attitude. Probably we’re going to do a vinyl pressing too. Then we’re going to tour as much as possible.

Can you name some bands from your country or elsewhere as recommended listening?
Among the highest peaks reached by Italian pop music, we would mention Franco Battiato and CCCP Fedeli alla linea. In the contemporary indie scene we recommend Stella Diana, La Casa al Mare, Clustersun, 86sandals, and My Invisible Friend.

Is there anything else you’d like to share with our readers?
We just took part in a tribute compilation to Ride managed by The Blog That Celebrates Itself, covering “Polar Bear”. It’s another very nice project, which will be released soon: we hope you will like it.