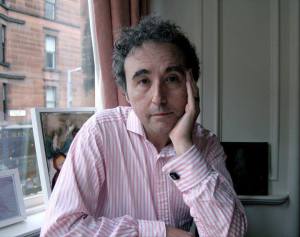 Slaughter Joe aka Joe Foster (born Joseph James Foster Ruiz) is a musical artist, record producer, historian, and former child actor based in Scotland. Along with Alan McGee and Dick Green, he formed Creation Records in 1983. He set up the Kaleidoscope Sound label in the mid-1980s, and Creation’s subsidiary label Rev-Ola Records in the early 1990s.  He is noted for producing the The Jesus and Mary Chain, The Telescopes, Primal Scream’, and My Bloody Valentine. He also produced records for many others, including the X-Men, The Jasmine Minks, The Loft, Felt, The Sea Urchins, The Bounty Hunters, Dave Kusworth, 18 Wheeler, Razorcuts, I, Ludicrous, Captain Soul, and The Creation among others.

His early days in music can be traced back to the early 80’s avant garde pop of the Television Personalities. He produced the TVP’s classic album, The Painted Word, before joining Alan McGee in the embryonic Biff Bang Pow! In 1983 he formed Creation Records with Alan McGee and Dick Green, going on to become the label’s house producer. In this capacity he produced many of the early singles and albums that distinguished the label, including material by the Loft, Primal Scream, Jesus And Mary Chain and Biff Bang Pow! By 1987 Foster had begun a relationship with My Bloody Valentine, recording singles with them for the Kaleidoscope Sound label, before bringing them, and another artist on that label, Dave Kusworth, to Creation Records. Two albums with Kusworth, plus two Felt collections, were produced in 1988, before he moved to Holland to produce various projects for the Megadisc label.

On his return to England he would use this experience to help young bands tour the low countries, and he also returned to live sound engineering (having initially taken this role with the fledgling Jesus And Mary Chain). In 1991 he set up a small demo studio with Sonic Boom (ex-Spacemen 3) to record the artist’s new material and that of other local bands. The following year he returned to Creation to set up a subsidiary division, the Rev-Ola label, in order to license and remaster material from the 50s to 80s (including the excellent reissues from the Millennium and Sagittarius). He continued to run the label while producing albums by 18 Wheeler and the Creation, the 60s psyche band who originally inspired the parent label’s choice of title. After the break-up of Creation Records, Foster moved on to join the newly formed Poptones label. Then, in 2002, in 2002, joining forces with Cherry Red Records’ Iain McNay in revitalising the Rev-Ola label.  He has recently worked with and has released records by – Eugene Kelly, BMX Bandits, Norman Blake, The Fine Arts Showcase, Zoe, Control Freak, The Cake, Roger Nicholls and a Small Circle of Friends, Evie Sands, The Wondermints, The Ecstasy of St. Theresa, The Telescopes, The Brian Jonestown Massacre & Richard Olsen. Joe Foster’s list of musical credits are endless. You can check them out HERE.

His releases under the name Slaughter Joe are: “Slaughter Joe And The Modern Folk Quintet – All Around My Hobby Horse’s Head ‎(LP) (Kaleidoscope Sound 1987) & “The Pied Piper Of Feedback” (Creation Records 1990)

More recently Joe Foster has been working tirelessly with todays up & coming bands/artists from all around the globe, instilling his hard earned knowledge of Production, Mastering & Remixing Skills on their music! In my opinion he is a musical visionary & someone that young bands of today should not only look up to, but should investigate as a source of all things music! We sent Joe a few questions about his Career, Todays Rebirth Of Shoegaze & Creation Records. He kindly agreed to answer them. For that we are eternally grateful and we thank him a lot. Check it out:

Del: Hi Joe – Before we start, can I just say that I’m a big fan of yours (STARSTRUCK DEL TALKING). ‘The Painted Word’ by The Television Personalities is a truly great album. I know that you not only produced it but you played most of the instruments on it as well, so as far as I’m concerned you are a musical visionary!

DEL: When did it all begin musically for you?

JF: **IDK drifted into it I suppose…as a child actor of a low range type haha also my late father was a recording engineer at various studios and the BBC…through his contacts I was working at a tea boy level at various music publishers in ‘’Tin Pan Alley’’ era Denmark Street not too far from where I lived in Fitzrovia…not then at all a fancy part of town let me add haha. The London music world was still just about as it had always been since forever, many of us worked in lowly positions in it looking to work out way up…Dan Treacy worked for Swansong records/Led Zeppelin as an office boy, which he hated haha…Stevie New and Rusty Egan of The Rich Kids etc worked at Warner Bros in the postroom so many other teaboys about hahaha the classic… a lost world haha lost as Atlantis…a shame in some ways as kids cannot feel part of an interesting business, where who knows? Instead they are put out there as contestants on an amateur hour TV show and that’s the new mainstream…tragic really…we would kind of know people like Andrew Loog Oldham or Derek Taylor or whoever…kids today trying a mainstream way know who? Some TV wacko…
I was also studying at the Central School of Art for some years, and moved in that world…still do in some ways haha met all sorts of people..London in that period was pretty buzzing, and we were all part of it, no matter how low we were seen by the movers and shakers, to ourselves we were genius hahaha it was a clubtastic time and we heard so much different music and met so many people some things we felt part of others we observed and liked or hated but all interesting to us as artists…oh well

DEL: You have produced some amazing bands from all around the world, some of them labeled as seriously influential in modern day music. Big names such as – My Bloody Valentine, Jesus And Mary Chain & Primal Scream, to name but a few. But you are also a gifted musician & founding member of The Television Personalities. How difficult was it back then to get your music heard by the right people? And do you have any insight for the bands reading this interview into approaching record labels today?

JF: **As I say, still a small world in music, Soho in London, various places in NYC, Hollywood etc though it was the mainstream but it was reachable we never felt it was impossible….we just wanted to lord it with our art and we kinda did eventually. We never felt ANYTHING was impossible..or difficult. Delusional? probably haha. And if we could not be on the mainstream show or label we would create our own and propose it as a replacement culturally...IDK how gifted I am as a musician..multi talentless perhaps haha
Alas today there has been a creeping amateurisation going on…which has tbh hurt music…if no one is a pro, it’s all for free and it’s all a game..your art means little..grrr haha oh well I better get rich parents 🙂 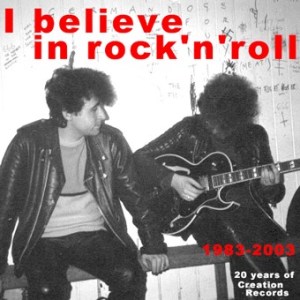 DEL: In the 1980’s & into the early 1990’s – ‘Creation Records’ changed the perception of modern music & brought a blissfully immense sound to the ears of a youth culture crying out for something new. Did you ever think that this little independent record label, which you helped to start, would still be influencing kids today – to the extent that nearly every band referenced as influential to them now, were once Creation Records artists?

JF: **We felt that Creation Records and everyone associated with it would be a legendary new beginning never to be forgotten 🙂 a new world perhaps we were all insane haha perhaps we still are? This bonded us all to a scary degree in a mental no questions way it still does very tribal oh yesh 🙂 perhaps that needs to occur in a shoegaze rebirth?

DEL: You gave a quote recently about the Ear To Ear Records & Gerpfast Kolektif Records free to download, compilation release, featuring 30 bands from all around the globe, entitled ‘Revolution – The Shoegaze Revival‘. In it you spoke of a rebirth instead of a revival. Can you recommend some of the newer bands around today, who you are either listening to or working with & who you reckon are contributing to this rebirth?

JF: **Yes exactly I feel this has arisen as what I prefer to call a rebirth a resurgence of a feeling in music in a very organic way…spontaneous something I can identify with…and good grief 30 bands from all over the world? All at once? Having never really met? Something is afoot oh yesh!
The structure of the label (Ear To Ear Records) I find interesting…it is based in Wales and also in Canada…with an awareness of how to publicise the whole thing worldwide…a positive aspect of the internet, like being able to do mixes/remixes without shlepping huge reels around town/the world..opens it all up…one can be anywhere or everywhere like a comic book villain haha the world will be conquered by all this I think this initiative of doing 30 bands right there in a one-er sets out the stall for a whole new thing…and getting it out there makes the magic happen..and it IS magic make no mistake! Let’s focus on these bands to begin…because there will soon be so so many more..and not all the same or even similar…once the genie escapes, it’s game on!!

DEL: Alan McGee was recently quoted as saying that – “Joe Foster was the Andy Warhol of Creation Records as his pop art prophecies always came true” – Taking that quote into context, who, in your opinion out of all of the bands that you had on Creation Records were the stand out acts for you? And why?

JF: Haha very kind of Alan to say that…I am possibly not quite so omnipotent as all that, but maybe I was…and will be again….so you can take me seriously re the new bands compilation, a new world will escape from it!!
The bands? I loved them ALL every one and still do….as different as many of the bands were, if one takes an academic view there are many common themes to them…perhaps I should write a paper haha

DEL: And Finally, What’s next for Joe Foster? Who are you working with at the minute?

JF: **Right now I have been recovering from a fairly challenging spinal injury, almost there 🙂 meanwhile producing/mixing/remixing and mastering a whole slew of artists old/new from all over the world…that is an advantage of internet world haha lately have produced CuT, Fur Cough, The Beat Movement, and Andy Gallagher…and done mixes for Sonisk Bloodbad, The Veldt, Sleepyard and many others…mastering I am doing non stop for artists old and new…been doing a few jazz and exotica type artists in vinyl albums too, as I love the sound…mono vinyl oh yesh :-)….I may well start doing some contemporary artists too…I like to live my life of love and adventure oh yesh haha ……..

Del Chaney has spent the last two years not only fronting popular Irish Electronic duo Analogue Wave, but also dedicating his time to uncovering the best artists in the Unsigned or Small Independent Label based Shoegaze, Dream Pop, Post-Punk & Post-Rock genre’s of music from all over the globe & reviewing them for this blog – The Primal Music Blog. His other arm The Primal Radio Show has gained considerable respect from bands and promoters alike since its conception in 2013 & has hepled him in actively promoting a genre of music that he is passionate about. He also currently writes for Canadian based online music webzine ReplicantEars. Hailing from Dublin, Ireland, he is a keen Vinyl Collector, Tattoo Fan & all round good guy! He is a self confessed music freak & is never far away from a studio console or a turntable.