PREFACE: I don’t throw the grand rating of 5/5 around so easy. The album/EP has to be of top quality; has to be of a level of thought provocation and originality that goes that one step further than other bands and artists in that particular genre. It has to be a piece of music that one can revisit with as much reinvested interest as before… A piece of music smart enough to set itself apart from mediocrity or blandness. And this band, the Italian fuzz/noise/shoegaze masters ‘My Invisible Friend’ have done all of this on their three track self-titled EP; which somehow excels further, with more interesting and brilliant aspects as many full length albums have. What is this EP? It’s a noise-riddled adventure, a passionate and tasteful throwback drowned in originality that defies genre and musical blandness to echo in your ears with an EP sound worthy of a 5/5 rating… What else is there to say?

‘My Invisible Friend’ are an Italian noise-gaze band who practice in the art of shoegaze/noise rock and pop/darkened Krautrock and even a tad of drone music thrown in there for good measure. Throughout the EP the band blast away with noise-orientated feedback over catchy and diverse shoegaze riffs and a powerful and echoed sound that is contrasted with barely audible vocals, evoking some sort of dream pop element into the mix. The self-titled EP begins with the hazy, over six minute fuzz/crunch of ‘Eyes’ which starts like a garage-rock song, rattling the listeners ears heavily, before introducing the airy and tiny vocals. Eventually, at around the one minute mark, the listener is introduced to a fantastic, Kraut-ish riff that suits the drum machine-sounding drums. The song builds and builds, occasionally sinking into mesmerisingly beautiful patches of dream-inspired shoegaze murmurings before perhaps the greatest riff on the whole EP fills the listeners ears. After this, the true mixture of shoegaze and noise rock begins to show, creating an absolutely brilliant track.

The following track ‘Endless’ creates a thicker and much heavier atmosphere than its predecessor with a much more layered and eerie track, this time exceeding nine minutes, making it a mini-epic of a track. ‘Endless’ is filled with Whirr influenced instrumental ear piercing by the guitar and is helped subtly by the rat-tat-tat of a slow, drone style drum machine in the background. The vocals that inhabit the track seem softer than on ‘Eyes’ and the opening half of the song has it pitched as almost a dream pop tune, until it transforms into a much more thorough version of itself. This seems like the sort of song that would project a wall of sound-style presentation at live shows… A spectacle of true and utter genius. Around the four minute mark the track becomes an atmospheric monster, with all matter of layering, reverb, echo and noise drowning out the breathy and alluring vocals. After each listen ‘Endless’ becomes more accomplished and dreamy than the riff-centred ‘Eyes’, which seems minuscule after each listen when compared to the wild beast that is ‘Endless’. In essence, ‘Eyes’ is the beautiful, mesmerizing and shimmering shallow end of the pool, while the much deeper and heavier ‘Endless’ presides in the deep end, where beauty is evident, but there is so much more water.

The EP’s final track is one that will no doubt circulate most predominantly in discussion about this EP. It will probably receive the most airplay and critical and commercial narration out of any track, and will easily be the most listened to song on the entire EP… Maybe even more so than the entire EP itself. As any listener may think, I believed that ‘Endless’ would be the most large-scale track on this whole EP… Taking into consideration its size and layering… But then the band threw in ‘Sleepless’ at the very end.  ‘Sleepless’ is an almost 18 minute epic, layered in the bands token sound they have expressed on the former two tracks. Its towering and heavy characteristics make it difficult to feature in words, and thus, in this very review. The few things I will say about ‘Sleepless’ is that its editing/mixing and layering are of an exceptional quality, as it maintains its vast and echoed momentum for the entire song. The very writing skill required to write such a song is also immensely evident, as the band express feelings and evoke images through nothing but pure sound. The dream-pad sound that is eventually drowned out by droning noise sees the band at their most shoegaze passage of music… It is an absolute must listen.

This EP is a 5/5 for a number of reasons ! One of them though is that I was not bored at any point during the EP, meaning that ‘My Invisible Friend’ jumped the preverbal shark that so many other shoegazers tend to wade in the same pool as. Another is that it surmounts genre in the sense that it blends noise with reverb, dream with drone and low strung vocals with feedback laden guitars. There are many more reasons… But I urge you to make your own by listening to one of the most interesting, original and brilliant Shoegaze releases in the past while… Ultimately, it exceeds many albums by so called professionals, collaborations or supergroups, by sticking to its own, injecting some influence and beautifully crafting its sound.

‘My Invisible Friend’ will release this latest self titled three track EP on the 19th September 2016 via the indomitable purveyors of all things fuzz, the London based ‘Fuzz Club Records’. Head over to www.fuzzclub.com for pre-order details. 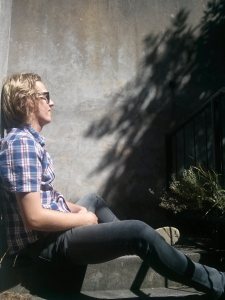 Cam Phillips is a writer and above all, a music lover, who seeks to gain experience through writing and listening. He is also an avid film viewer and art and literature junkie who enjoys creative writing. His most recent published work was featured on the Australian heavy music blog, I Probably Hate Your Band.