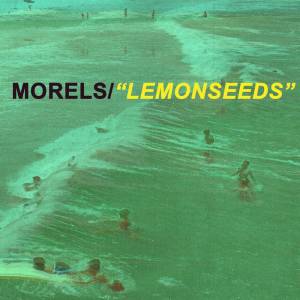 ‘Morels’ hail from Baltimore, Maryland & have a unique collective sound that is sometimes melodic alt-rock, sometimes noise-pop mixed with a hint of fuzzy impressive shoegaze & intertwined with post punk inspired vocal arrangements. But what interests me the most about this band is their ability to evoke melancholic snapshots in time of hazy youth, warm summer days & full on fuzzy shoegazing. Made up of ex-members of both Bad Liquor and The Warlocks plus members of The Flying Eyes/Bad Lung they have just released a stunning collection of tracks on the aptly named – ‘Lemonseeds EP’.

The ‘Lemonseeds EP’ opens up with a straight laced indie rock inspired stalwart of a track entitled – ’Honeybee’. On first listen this track has an early 90’s feel to it with its vocal tones & production effects intertwined with an edgy musical undertone. Its a happy, jangling, floating 3 minute affair with addictive guitar parts & a solid drum pattern but to me it does exactly what it says on the tin. This kind of stuff doesn’t normally float my boat but ‘Morels’ have my attention! Check it out:

At first the deceiving opening drum pattern on track 2 leads me to believe that we’re on a similar voyage to a land of tame run of the mill indie rock. But boy was I wrong! ‘Morels’ open up a swirling maelstrom of beautiful shimmering guitars, immense drums, addictive bass lines & what I think is a synth progression running just under the madness that reminds me of very early ‘Cure’. There is also a subtle hint of mid/late 80’s post punk in the vocal too on ‘Raygun’ that just sucks you in and keeps you interested & fixed on the track. This is a sublime wall of sound that is simply beautiful. You need to check it out:

Track 3 ‘Lemonseeds’ floats into the musical atmosphere with a hazy laid back alt rock vibe surrounded by swirling synths & yet another brilliant vocal performance. This is what I mean when I say that ‘Morels’ have the ability to evoke memories. This track just washes over you & takes you with it as it tells its story. A triumph, musically!

The closing track on this latest 4 track EP from Baltimore based noise merchants ‘Morels’ is possibly my favourite on the entire release. ‘Communion’ is a full on menacing ball of energy with its 80’s inspired emotive synth swells, Sisters of Mercy / Cult esq vocal arrangements, impressive drum patterns & full on walls of swirling droning guitars. This track alone makes it all worthwhile. You need this in your music collection! Check it out below: