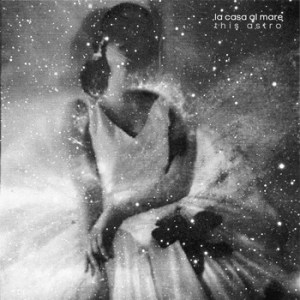 I first came across La Casa Al Mare after the release of their double A side single ‘CD girl / M‘ back in September 2014  & their blissful sound had me hooked instantly. Their walls of reverb laden guitars enticed me in and welcomed me with open arms. They have a distinct sound that harks back in parts to the hazy shoegazing sounds of the early 1990’s. Full of expressionism & psychedelic influence La Casa Al Mare create a maelstrom of lucid but emotive shoegaze that transcends most modern day shoegazing bands but they don’t showboat or gloat about it in any way. They are reserved in their songwriting ability but can bend & twist frequencies at a whim to manufacture a sound so addictive that it will have you yearning to hear more. I firmly believe that listening to them will transport you to another sonic plain – a higher plain, where psychedelic Shoegaze is king! Hailing from Rome, Italy – La Casa Al Mare are: Marco Poloni – Bass & Vocals, Paolo Miceli – Drums & Alessio Pindinelli – Guitars & Vocals and they have just released their epic debut first full EP entitled –  ‘This Astro EP‘. The EP includes the previously internet-only released double A-singles – M/CD Girl, Sunflowers/Tonight Or Never, plus three previously unreleased songs – I Don’t Want To, At All  and the album’s title track ‘THIS ASTRO‘, exclusively available on CD only! The CD pre-order incudes the immediate DIGITAL DOWNLOAD of the whole tracklist, minus the ‘This Astro’ song. A download code for At All will be sent separately via email to You. The CD shipping date is due in early May.

The EP opens up with the magnificent – ‘I Don’t Want To’. A solid wall of sound hits you between the eyes and transports you back to 1989/90  & into a live venue packed with people focused on a new musical adventure unfolding before their eyes. This Is shoegazing as it should be. Touches of My Bloody Valentine swirling around a tornado of Guitars, Bass, Drums & Vocals to create a sound so beautiful it will blow you away.

Track 2 is the immense – ‘Sunflowers’. For those of you who have never listened to ‘La Casa Al Mare‘ before this should be your starting point. A blissful roller-coaster ride of sonic emotions wash over you as you glide on a wave of reverb laden guitars, pounding drums & blissful vocal tones. This is how it should be. This is shoegaze.

Sonically mind-blowing & immensely addictive ‘M’ enters the musical arena like a steam train. Released back in September 2014 this is a  swirling monstrous maelstrom of sound twisting around an addictive vocal line that sends shivers down your spine with its wave after wave of reverb laden guitar swells! Its another triumphant track & the very first track that I initially ever heard from this immense band. After listening to this I was instantly hooked. You will be too.

Subtle hints of 60’s psychedelia float on the sonic waves of track 5 on this impressive debut EP release from Rome based ‘La Casa Al Mare‘. ‘Tonight Or Never’ – is a laid back slice of coolness. Acoustic guitar tones soothe the atmosphere & create a welcome break from the previous sonic onslaught of the opening 3 tracks. Check it out:

The closing track on ‘This Astro EP’ doesn’t disappoint. ‘CD Girl’ is another brilliant example of a band in love with their music. This track will take you by the hand and guide you through a universe of immense sonic delights with crashing drums & addictive guitar lines. Reminiscent at times to Ride, Slowdive & Chapterhouse – ‘CD Girl’ will wash over you, cleanse you of your sins & take you on a magical journey. A modern day masterpiece. Wait for the chorus change to hit you & enjoy:

This is a magical EP full to the brim of what modern day shoegazing should be about. Emotive, awe inspiring & addictive tracks that open up your senses to every single blissful note. Do yourselves a favour & go and get a copy of this release. It is simply stunning . This is only a starting point for ‘La Casa Al Mare’ & I now urge them as a band to go & write a full album of new material & unleash it on to the world because I for one will be top of the Q to buy it when they do.

‘This Astro EP‘ is now available to pre-order on CD from – lacasaalmare.bandcamp.com