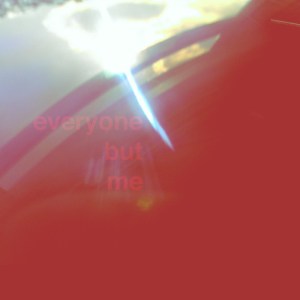 ARTIST: Everyone But Me

RELEASE: Everyone But Me EP

As most people who read my reviews for ‘The Primal Music Blog’ would know it takes a hell of a lot to move me musically to the point that I take the time to write about it. I tend to be rather picky when it comes to a genre of music that Im passionate about. Shoegaze & Dreampop to me should (first & foremost) have the ability to move the listener beyond the normal realms of sonic bewilderment & in turn transport him or her to a higher plain where a multitude of reverb layered guitar textures intertwined with solid drum patterns, translucent vocal arrangements & throbbing bass lines assault your cranium with beautiful blissful tones full of emotive goodness! Or in lay mans terms – It needs to sound fucking immense! So with all of that in mind, allow me to introduce you to my new favourite band – ‘Everyone But Me’.

Hailing from Columbus, Ohio ‘Everyone But Me’ are no prudes when it comes to creating beautiful fuzzy dreamgazing soundscapes. Their self titled 5 track debut will attest to that. Released on 16th May 2015 via digital download on bandcamp & on tape via the brilliant ‘Custom Made Music’ this EP will catapult you into a world where gazing is king & emotive melodic chorus changes evoke the heady infantile early days of the first wave shoegaze era. The band are made up of duo Nick Bain & Jason Grady but their sound is insanely massive! It loops & arc’s all over the sonic palette with an intensity so big that will have you swimming in a golden hallucinogenic haze. Creatively astute & impressively imaginative ‘Everything But Me’ will attract even the lesser fans of the shoegazing / dreampop genre with this immense self titled debut EP.

The EP opens up with an absolutely amazing whirlwind of fuzzy reverb, layered synths, infectious vocals & programmed drums. ‘Isn’t Far’ is an impressive opener full of infectious looping sound waves leading to a soaring chorus that will tickle your spine as you are lifted up and carried along with its psychedelic overtones. Simply stunning!

Track 2 – ‘Say Farewell’ is a charging beast of a track reminiscent in parts to UK based shoegazers ’93 Million Miles From The Sun’. This track is astonishing with its sprawling swirling synth patterns, delayed reverb induced vocal arrangements & pounding repetitive drum sequences. But for me its the melodic vocal charge in the chorus that is absolutely immense. The production on this track alone is stunning. Check it out:

‘Just Like Anyone’ is a full on sonically intense train ride to a land where reverb is a god given birth right. Its a swirling mass of droning guitars, sweeping drums & haunting vocals that will blow your mind. Again the chorus changes on this track are uplifting to the point of no return. This is another level of shoegazing. Truly a masterpiece!

The beginnings of track 4 on this self titled EP from Ohio based ‘Everything But Me’ lead you into a false sense of security! Im not afraid to admit that. The opening salvo’s of ‘I Never believed You’ distract you from the sonic assault that lurks in its shadowy underbelly! A wall of beautiful fuzzy reverberated sound hits you full on in the face & this listener is hooked all over again. So good!

The final track on this impressive EP is 7 minutes plus of sonically delightful fuzzy sound waves. ‘Still Not Enough’ is a charging monolith of a track that is so addictively hallucinogenic at times that I had to press stop, then rewind & start it all over again just incase I missed something the first time around! The immense vocals are so intensely intertwined with swirling guitars, the ever present pounding drum pattern & layers upon layers of shimmering bloody brilliance that you can do nothing at all other that float along with it on a wave of amazing shoegaze. This is a track that just keeps giving! A triumphant ending to a absolutely beautiful EP.

This debut 5 track EP from Ohio based dreamgaze duo ‘Everything But Me’ is a rare thing indeed. It’s as rare as hens teeth! I can safely say right now that the Everything But Me EP will be in my top 5 EP’s of 2015 come years end without a doubt! It is simply stunning from its opening fuzzy chord progressions right through to its shimmering finality. It had me hooked from the very first note & I am so glad to have heard it.

Its one of those releases that I will continue to return to again & again. Magnificent!

Del Chaney has spent the last three years not only fronting popular Irish Electronic duo Analogue Wave but also dedicating his time to uncovering the best artists in the Unsigned or Small Independent Label based Shoegaze Dream Pop Post-Punk & Post-Rock genre’s of music from all over the globe & reviewing them for this blog – The Primal Music Blog. His other arm – Primal Radio – has gained considerable respect from bands and promoters alike since its conception in 2013 & has hepled him in actively promoting a genre of music that he is passionate about. Hailing from Dublin, Ireland, he is a keen Vinyl Collector, Tattoo Fan & all round good guy! He is a self confessed music freak & is never far away from a studio console or a turntable.