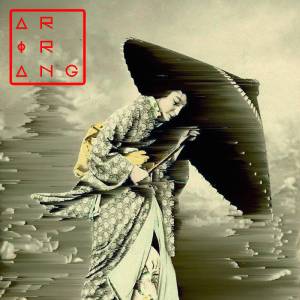 Italy is a hotbed of brilliantly emotive, post punk fuelled, droning shoegaze & dreampop bands these days and ‘The Primal Music Blog’ has reviewed many of them before. From Milan to Napoli, Rome to Modena we are big supporters of the Italian ‘Scene That Celebrates Itself’ or ‘Italiogaze’ as the scensters are calling it these days. This week we were introduced to yet another immense musical outfit based in Italy. ‘Arirang’ were born in Milan and are made up of Marco Mercuzio P – Guitars / Vocals, Francesco M – Bass & Giacomo C on Drums. Their debut EP release entitled ‘Geisha’ was officially announced to the masses back in April 2015 and is a truly magnificent collection of post rock inspired soundscapes intertwined with stunningly emotive cinematic shoegaze that is at times interspersed with post punk inspired vocal arrangements that will leave you truly amazed. The musicianship alone on this 5 track release is simply stunning!

The EP opens up with beautifully arranged ‘Humming Rigmaroles’. This is a slice of cinematic post rock in its purest form. Stunning reverb infused vocals sit on top of an enticing drum arrangement & lead you into its explosive core. This track is full of musical peaks & troughs and it will take you on an unbelievable sonic journey. Stunning!

Track 2 ‘Mantrabox’ begins with full on rock god connotations. Reminiscent in parts to ‘God Is An Astronaut’ with its explosive guitar arrangements and post rock infused progressions. The reverb fuelled vocal arrangement is simply addictive and leaves you wanting more. There’s a subtle hint of programmed drums running through this tracks spine but this only enhances the overall sound. Check it out:

Track 3 is another cinematic soundscape wonder! ‘Under The Mount’ begins on a slower curve than the previous 2 tracks but don’t be fooled. This track opens up into an instrumental shoegazing masterclass as waves & waves of emotive walls of reverb drenched guitars wash over you and scoop you up with their many layers of immense goodness until it breaks and gently places back onto terra firma. I am amazed at the level of musicianship that Arirang are expressing on this track. It is simply sublime! Bravo!

Track 4 – ‘Oh Whale’, is a slow burner. Ethereal vocals float on top of a steady but sparse percussion arrangement & intoxicating guitar lines until it erupts into a full on post rock gem. ‘Arirang’ have a cunning knack of bringing their listeners on a journey of musical discovery with the ebb & flow of their musical soundscapes. The programmed drum patterns returns mid way through the track but again it adds to the overall sound. This is yet another beautiful track of immense proportions & fans of emotive post rock will instantly fall in love with it. Stunning! Check it out:

The closing track on this impressive release from Milan based ‘Arirang’ is a whopping 12 minutes plus of post punk infused vocal arrangements, droning sounds, pounding drums & swirling guitars. 6 minutes in and silence . . . . . . only to build into a maelstrom of instrumental shoegaze fuelled swirling guitars & pounding drums of immense proportions. A fitting end to a truly epic release.