Wow, another release from the prolific SPC ECO, the father-daughter duo consisting of Dean Garcia (Curve) and his daughter Rose Berlin. Let’s get one thing out of the way, OK? The band can’t help but remind listeners of Curve; it’s in Dean’s bones, he’s never really escaped from his musical past. And that’s cool, because Curve was an amalgamation of shoegaze with psychedelic-drenched dance beats, and nobody else did it better. So now we have the current project, and it contains less of the hard edges you’d expect from this team, and more of the softly blurred dream pop that they do so well. And thankfully, not a voice synthesizer in sight. I have to mention that, because they erred in messing with Rose’s beautiful voice on last year’s Dark Matter.

So what do we have here? Another solid, darkly inflected release of dreamy trip hop. “Out of My System” is an obvious single, with its catchy melodies and spacey sonic backdrop. It’s the most like their earlier material, which means total ear candy, but it’s not a big step forward. Whereas “Incomplete” is richly layered melodic architecture, slow and sultry as Rose’s breathy vocals roll over the musical waves. It’s quiet and slightly sinister, and ever so beautiful. “Bare To Lie” is bleak dark wave, yet at its core it’s a stunning piece of work. I could totally see this used as a film score, it has that noirish feel I love so well. “Your Own Way” is gorgeous, gauzy dream pop, another killer tune that you need to hear immediately. This is yet another example of how perfectly suited this pair would be for film scoring. “Silent Maybe” reminds me of vintage Curve, and please know that is the highest compliment from me. It’s all about the heavenly vocals and the nearly symphonic landscape that Dean paints around Rose’s voice.

“Think Twice” is icy, slow burning and could be the soundtrack for your favorite spy flick. The lyrics are empty and sad, and leave you wondering what it’s all about. “Revived” is alive with bubbling synths and an upbeat feel, despite the feeling that it’s about the aftermath of a break-up. “All In Time” is heavier synth pop under a starry sky, bits of light sprinkled against velvety darkness. “Lost In a Crowd” closes out this set of songs, and it’s much quieter than the other songs, a great showcase for Rose’s lovely vocals. It’s all rather solemn and almost like a chant. So, what you can expect is another really good album from this duo with a variety of tones, beats, and moods.

‘Anomalies’ will be available to buy/download on the 19th August 2016 via: saintmarierecords.bandcamp.com 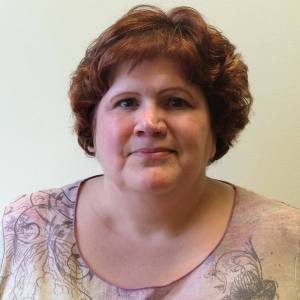 Music has always been a driving force for Elizabeth Klisiewicz, which she days “continues to define my existence”. During and after her college years, she ran a weekly radio show at WMUA FM Radio and also at a community station in Springfield, MA, in addition to writing music and concert reviews for the college newspaper. At present, she writes for The Big Takeover Magazine and The Active Listener Blog, and recently began producing a semi-regular Mixcloud-based show called The Kitchen Sink. In the real world, when not writing technical manuals, she gets her thrills from reading mysteries, birdwatching, and can always be found with a camera and a maxed-out storage card full of music.