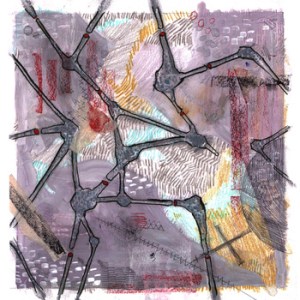 Formed in late 2010, Pleasantry have made a name for themselves in Singapore’s local music scene. Recycling musicians from active as well as inactive bands, the quintet crafts and carves music out of each member’s various listening backgrounds. Drawing inspirations from dreamed-up scenarios based on real-life scripts, their compositions showcase simple lyrical tones offset by the accompaniment of rich instrumentation and varied song structures. This genre-bending album is inspired by their collective memories as a band, turning real life scripts into fantastical scenarios. The tracks send listeners into an ethereal dreamscape, powered by airy voices layered underneath swirling instrumentals. Pleasantry are – Samantha Teng (vocals, keyboard), Isa Ong (vocals, guitar, bass, keyboard), Ahmad Ariff (keyboard, guitar, bass), Daniaal Adam (Drums) & Haziq Hussain (Guitar, bass, vocals). For the purpose of this review we picked our favourite tracks and wrote about them in detail and created an overview of the rest. Check it out:

On my first listen to this album I realised that Pleasantry have a great knack of skipping through genre’s with abandon. They skip through shoegaze, dream-pop & noise-pop with ease. They are all seriously good musicians and their sonic compositions will have you mesmerised.  There’s a song for every mood on this impressive release. For me the stand out track is ‘Take It in’. It’s a snap shot to the mid 1990’s with hints of old school dreampop & indie rock swirling around a brass section to die for. Reminiscent in parts to early Boo Radleys. The added bonus for me is the epic vocal arrangements. Simply stunning! Check it out:

‘Spent’ floats into the ether on a wave of strings and sublime vocals and reverb drenched guitar stabs. A stunning track that would grace any dream-pop compilation worth it’s salt. The duel vocal harmonies are divine & keep you interested as you float along with its addictive centre. A beautiful track indeed.

‘Owl’s’ – track 7 on this impressive release instantly caught my ear with its beautiful vocal arrangements, reverb drenched guitar lines & dream-pop infused swirls. This is a stunning track full of accomplished musicianship and sure to have you hooked on this band after your very first listen. This is beautiful in its arrangement & sure to captivate live audiences. Check it out:

Take a listen to any track on this album Channels, Farewell waltz, False Realities, Habit, Take It in, Spent, Owl’s, Swan Song, Nothing’s There & Terminals and you will instantly become addicted to the sonic soundscapes Pleasantry create. They are a really impressive band with varying influential traits that will keep you enthralled as you swerve through their musical highways. Theres also some musical contributions from other artists on this release that really need to be mentioned – Strings on “Farewell Waltz”, “Spent”, “Owls” and “Swan Song” by Josh Wei, Vocals on “False Realities”, “Habit” & “Swan Song” by Weish, Horn section on “Take It In” by Alfrey Noor, Hafiz Ismail, “Dizzy” Dzulhusnie and Shah Rizal & Keyboards on “Nothing’s There”, “Swan Song” and “False Realities” by Firdauz Asyraft. The album was Engineered and Mixed by Leonard Soosay at Snakeweed Studios in Singapore & Mastered by Rick Fisher and Rachel Field at RFI Mastering in Seattle, WA.

Pleasantry are happy to announce that they will be playing overseas for the first time on May 8th, 2015 at Canadian Music Week in Toronto, whose lineup includes Colbie Caillat, Death Cab For Cutie, Kiesza, Magic!, Billy Talent, The Jesus and Mary Chain and more. They will also be having their first short tour in the States in hopes of gaining international fans. Go and check them out if you can.